Could a low-histamine diet be the solution to your health problems? Do you suffer from any of the following?

If so, you’re not alone. MANY people have at least one of the problems listed above but might never suspect that the culprit could be right in front of their noses—on their dinner plates! These symptoms can all be caused by a tiny but powerful natural substance called histamine.

Anybody can have histamine intolerance, but you are at higher risk if you eat a GAPS diet or a low-carb diet, enjoy gourmet foods, or have been swept up in the current fermented foods fad. That's because histamine is found lurking primarily in aged, fermented, cured, cultured, and smoked foods. Foods like aged beef, ripe cheeses, salami, sauerkraut, red wine, and natto can all be quite high in histamine.

Histamine intolerance symptoms tend to appear very soon after eating a high-histamine food, typically within less than two hours. Symptoms typically disappear in a matter of hours and rarely last longer than 24 hours. These symptoms aren’t proof positive of a histamine problem; it is also possible that you have other food sensitivities or health problems, which we’ll discuss later in this article.

This post is dedicated to the practical aspects of histamine intolerance, such as diagnosis, prevention, treatment, food choices, food handling/storage, and medications to avoid. To learn about the biology and chemistry behind this diagnosis—what histamine is, how it forms, how it behaves in our bodies and why some people are more sensitive to it than others, please see my companion post: "Histamine Intolerance: Understanding the Science."

Histamine intolerance in a nutshell

Histamine is an important molecule used to regulate body functions, so it’s found naturally in our bodies in tiny amounts for good reason. The problem is that it is also found in aged foods. If you have healthy gut defenses, you can handle reasonable quantities of histamine in foods. However, more and more of us have compromised gastrointestinal systems and so have difficulty with even small quantities of natural food toxins like histamine. If too much histamine makes its way from foods into your bloodstream, it can cause a wide variety of unpleasant symptoms.

If you eat too much histamine or are sensitive to histamine, you can experience all kinds of annoying symptoms that most people wouldn’t think of as related to diet, including asthma, panic attacks, pre-menstrual cramps, and sleep disturbances.

Histamine intolerance is much more common than most people realize. Most people who have it don’t realize it—I was one of them!

Years ago when I first turned my diet upside-down and started eating a low-carbohydrate, high-fat, mostly-meat diet, my health improved tremendously in every way. Yet there were still some frustrating symptoms that would crop up every once in a while: IBS, fatigue, insomnia, ankle swelling, itchy skin, dry cough, and environmental allergies. I couldn’t tell which foods were the culprits. Sometimes fish or beef or pork would bother me and other times it wouldn’t. Some processed meats agreed with me while others didn’t. In 2013 I started a blog series about a new ketogenic diet I was experimenting with, describing how I felt along the way. It was then that Dr. Judy Tsafrir wrote in and suggested I might have histamine intolerance. And by gum, she was right! This eureka moment was what inspired me to write these articles for you.

Who is at risk for histamine intolerance?

How much histamine can you tolerate?

Nearly all foods contain at least a small amount of histamine, so it’s impossible to completely avoid it. However, some foods are MUCH higher in histamine than others. Unfortunately, histamine levels in foods vary WIDELY. For example, like other animal foods, fresh tuna is very low in histamine, whereas levels in canned tuna can range anywhere from zero to as high as 40.5 mg/kg. So as you’ll notice, most histamine levels in the tables below are listed as ranges rather than absolute values.

Unless you have your own personal chemistry lab, it is simply impossible to know how much histamine is in any given food. However, there are general guidelines that can help you guess whether a food is likely to be lower or higher in histamine.

*Note: the lists below are not meant to be complete, just representative of what I found in the literature.

Most (fresh) vegetables are very low in histamine, with levels ranging from 0 to 16 mg/kg. The notable exceptions are tomatoes, eggplant, and spinach:

Uncultured dairy products such as milk and cream tend to be very low in histamine, with levels of less than 1 mg/kg. The same is true for fresh, unripened cheeses with short shelf-lives, such as fresh mozzarella and ricotta.

Most fresh meats are very low in histamine. Dry sausages such as salami, pepperoni, and chorizo, are the meat products highest in histamine content.

Certain kinds of fish are more likely to contain high amounts of histamine unless they are very fresh, because they are naturally higher in the amino acid histidine, which bacteria can turn into histamine.

Some foods are suspected of triggering histamine release within some people’s bodies, even though they may not contain much histamine of their own.

How is histamine intolerance diagnosed?

If you have at least two typical symptoms (listed at the top of this article) and they go away either with a low-histamine diet or with the use of antihistamine medications, then you probably have histamine intolerance. As with any food sensitivity issue, keeping a careful food-symptom diary is very important in noticing patterns. There are many possible food culprits in the world that have nothing to do with histamine intolerance, so you may discover some surprising food reactions if you pay close attention. 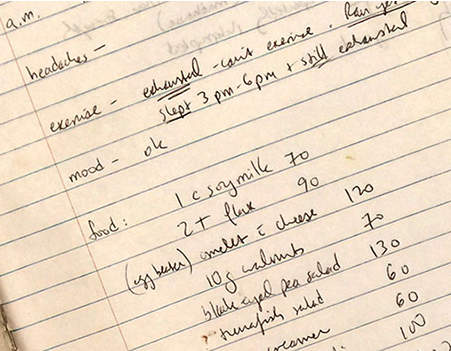 Keeping an accurate food diary— food and drink consumed, mood, symptoms, sleep, exercise, and medications—can reveal patterns and identify problem foods in your diet. This is a powerful tool in reclaiming your good health. There are numerous good mobile apps available.

Other possible conditions that can mimic histamine intolerance Include:

There is a variety of methods you and your doctor can use to figure out whether you might have histamine intolerance, but most available tests are imperfect. This means that even if you “test negative” for histamine intolerance, you could still have it. That’s why I believe the best approach is to eat a low-histamine diet for a few weeks to see if your symptoms go away. If they do, you’ve solved your own problem and you may decide you don’t need further proof or validation!

Why would that be? If you are sensitive to histamine, and someone gives you pure histamine, shouldn’t you have a bad reaction?

Here’s the thing: pure histamine does not exist in nature. In real life, histamine exists in foods, some of which can affect the way we respond to histamine. To make matters more complicated, histamine is always accompanied by related substances (other biogenic amines) in aged foods that magnify our reaction to histamine. There are also many other factors that can influence how you respond to histamine from one day to the next [see section below entitled confounding factors].

In addition, oral challenge tests are expensive and time-consuming, so they may not be offered by your doctor’s office and/or may not be covered by your medical insurance plan.

DAO levels in the cells lining the gut can be measured directly if you undergo an endoscopy and have small samples of your intestinal cells biopsied for laboratory testing. This test is the real gold standard, because most cases of histamine intolerance are thought to be due to reduced levels of DAO in the cells lining the gastrointestinal tract. Naturally, the biopsy test is rarely performed, because:

This is probably the best test available because it’s inexpensive, simpler, and more accurate than other readily available office tests.

In this test, your skin is punctured with histamine. If you develop a “wheal” (bump) on your skin that is still visible 50 minutes later, it is likely that you have histamine intolerance. Whether you test positive or negative for histamine intolerance by skin testing, there is about a 20% chance that the test result is wrong.

Unfortunately, symptoms of histamine intolerance are not simply about how much histamine is in the foods we eat. There are many other things that influence how we respond to histamine in foods, which can make things quite confusing for patients and doctors alike. Below are common reasons why we might have different reactions to the same food on different days.

My philosophy is this: if you notice that foods high in histamine bother you, you don’t need a scientist or a doctor to prove you right.

Of course, simple, natural, preventive measures are usually the wisest course of action. Understanding how histamine forms in foods can help you to minimize your exposure not just to histamine, but to all potentially irritating and/or toxic biogenic amines. 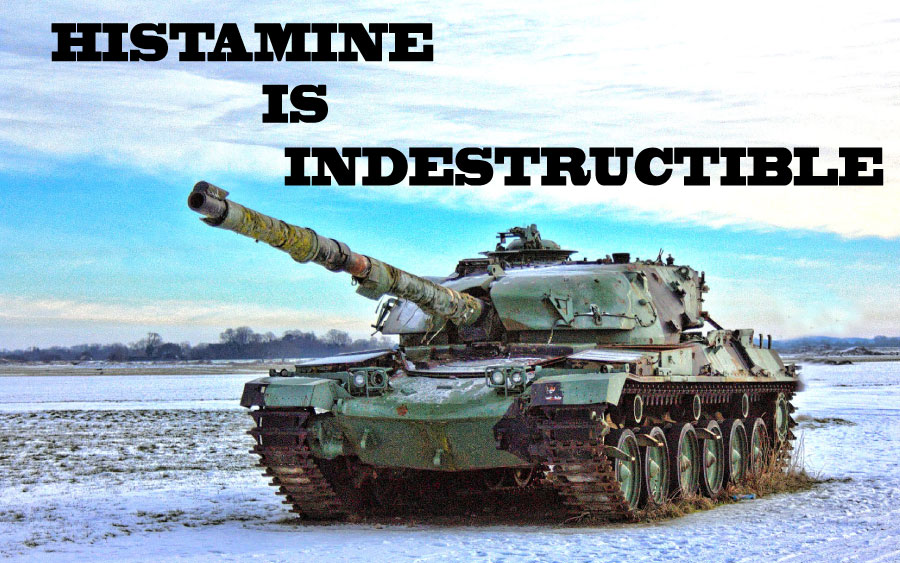 Once histamine is in a food, there’s no getting rid of it; it is not destroyed by cooking, freezing, hot smoking, or canning.

Histamine is indestructible. Once histamine develops in a food, there’s no getting rid of it. And if bacteria or yeast are still present in the food, histamine levels will only continue to rise. So here’s what you need to know:

If you suspect you have histamine intolerance, here are some options which may help you to feel better:

Please see my companion post: "Histamine Intolerance: Understanding the Science" which explores the fascinating world of biogenic amines, how histamine forms inside and outside of our bodies, how and why histamine affects our physical and mental health, why some people, especially women, are more sensitive to histamine than others, and why reactions to high-histamine foods can be so unpredictable and confusing.

To learn about the connection between food sensitivities and anxiety or insomnia, including the possibility that histamine is keeping you up at night or causing panic attacks, I recommend reading my Psychology Today article "5 Foods Proven to Cause Anxiety and Insomnia."

You can also listen to my podcast interview with Yasmina Ykelenstam, the Low Histamine Chef, about the connection between histamine intolerance and mental health. 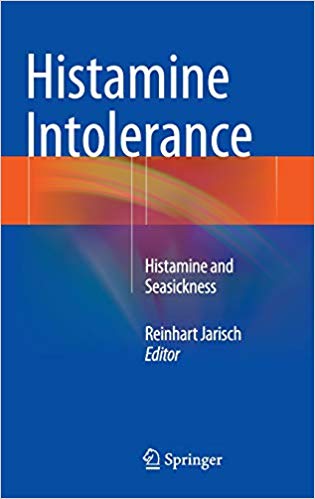 I have received numerous inquiries from people wanting to learn more about histamine intolerance. One resource that I found particularly helpful was a textbook entitled: Histamine Intolerance: Histamine and Seasickness by Reinhart Jarisch. Since it is a textbook, it is written in an academic voice and is expensive (although available to rent on Kindle), but goes into depth about many of the topics discussed in my two-part histamine series and includes many helpful food tables.