So, what if you already avoid refined carbs, eat the right kinds of fats, and still have ADHD symptoms? Perhaps you eat a Paleo diet, or a low-carb Paleo diet, or even a ketogenic diet, and are still troubled by ADHD . . . what then?

Food sensitivities can cause ADHD symptoms

In my work with children and adults with ADHD, I have seen some patients reduce or even cure their ADHD symptoms simply by removing certain foods from their diet. People are often completely unaware that they have a food sensitivity, especially if the food that bothers them is something they eat every day, like wheat or dairy products. Everybody is different, so food that is the culprit for one person may not bother another person at all. While any food can be problematic, the ones that have been shown by researchers to be the most commonly associated with ADHD symptoms are:

*People with Celiac Disease (an autoimmune disease associated with gluten) are more likely to have ADHD symptoms, and these symptoms usually improve on a gluten-free diet. However, people with ADHD are at no higher risk for Celiac Disease than people without ADHD.

Dietary studies have found a strong connection between food and ADHD symptoms. These studies are small and have their limitations, as most nutrition studies do, but they all produce remarkable results. These studies compared a standard diet to a special limited diet and found that the special diet resulted in a dramatic reduction in ADHD symptoms. Most people with ADHD are not aware of these studies (notice that all of them were conducted in Europe):

What was so magical about these diets? These simple diets removed all of the common food culprits listed above, as well as sugar and processed foods. These diets have a lot in common with whole-foods, hunter-gatherer diets of meats, fruits, and vegetables. I personally believe the studies may have worked even better if researchers had also removed the fruit juice (high in sugars), margarine (high in omega-6 and trans fats), and white rice (high glycemic index), but nevertheless, these diets worked very well. 62% to 82% response rates in outpatients and a 24% response rate in inpatients—pretty impressive. 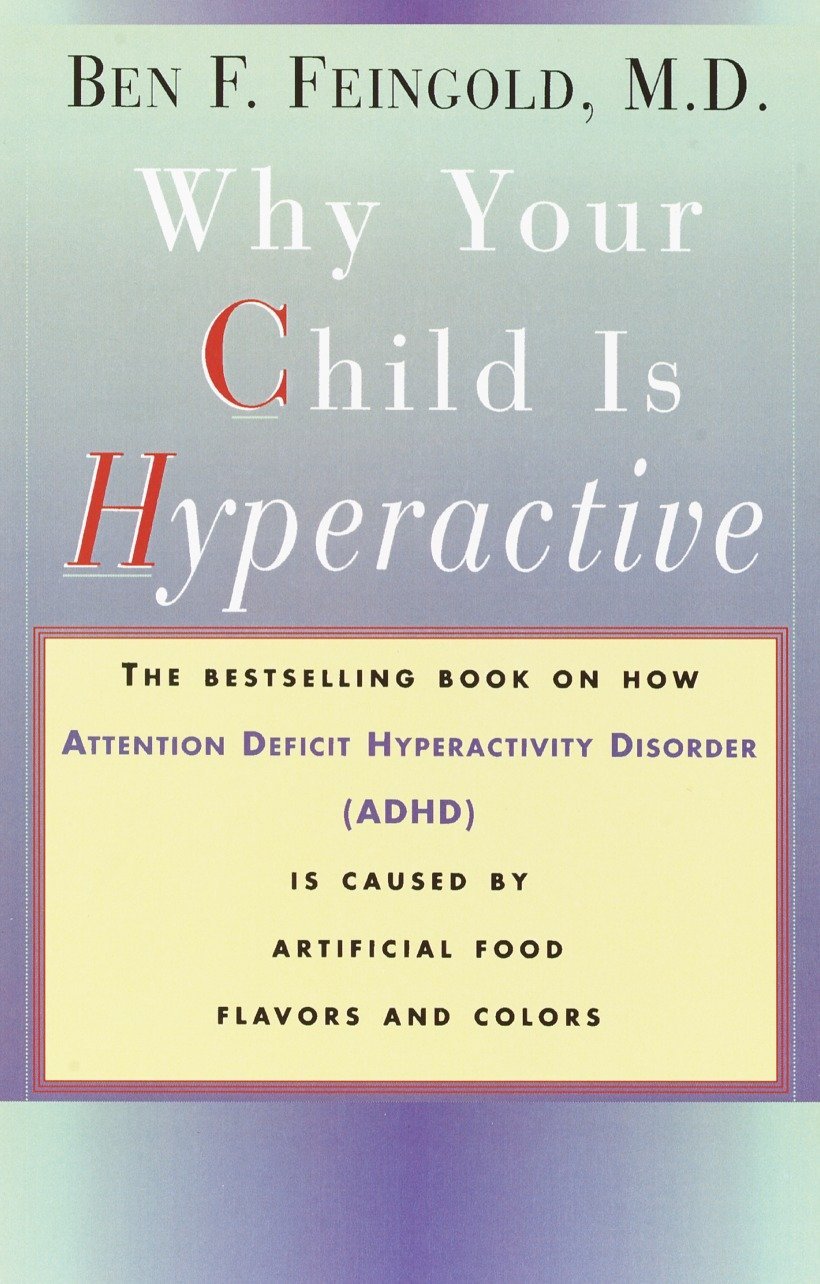 Ben Feingold, MD was a pediatric allergy specialist who wrote a book in 1975 called Why Your Child Is Hyperactive. He recommended a diet free of artificial flavors and colors, and advised avoiding foods containing salicylate, a naturally occurring plant chemical found in a wide variety of fruits, vegetables, and spices. He claimed that his special diet was effective for 50% of children with ADHD. This diet is referred to as the Feingold Diet, or as the “K-P Diet” (K-P for Kaiser-Permanente, the name of the medical center where he worked).

Plants use salicylates as signaling compounds and to protect themselves from infection and insects. Aspirin is a famous salicylate originally extracted from willow bark. Below are the foods Dr. Feingold thought to be high in salicylates, and therefore advised eliminating from the diet:

Improved food testing methods have since determined that the following foods contain the highest amounts of salicylates [Wood 2011]:

Legumes and grains are very low in salicylates. All animal foods, including meats, organ meats, and dairy products, contain little to no salicylate.

Does the Feingold Diet really work?

None of the studies of this diet were able to generate the impressive 50% cure rate that Feingold reported. However, some of the studies did find that a small number of children (11% to 33%) were significantly less hyperactive on his diet.

An analysis [Schab 2004] of the 15 best studies done on food coloring and ADHD found a clear connection between artificial food colorings and hyperactivity in children with ADHD. A review of all studies [Stevens 2011] concluded that artificial food colorings can result in significant changes in behavior in people with ADHD, and two studies found that artificial colorings can even cause hyperactivity in people who do not have a history of ADHD. The vast majority of studies tested complicated mixtures of artificial colors rather than single additives, often in combination with sodium benzoate, a popular preservative. The artificial colors used in experiments are listed below. Those in italics are no longer approved for use in foods in the United States:

Are people with ADHD more sensitive?

In my clinical experience I have found that many of my ADHD patients are more sensitive in general, not only to foods and medications, but also to other stimuli, such as scents and sounds. They can also be more socially sensitive, particularly to perceived judgment, exclusion, or rejection. The European studies detailed above make it clear that many children have food sensitivities that manifest themselves as ADHD symptoms. Could it be that some people with ADHD are simply reacting badly to certain foods? I know for myself that changing my diet significantly improved my concentration, productivity, motivation and energy, and eliminated my dependence on caffeine to get things done.

Your own body of evidence

While there are good medical tests available for true food allergies, there are no medical tests for food sensitivities. So how do you know if your ADHD symptoms are being caused by food sensitivities? There are many other bodily clues to food issues, such as asthma, eczema, fatigue, fluid retention, frequent headaches, or digestive problems. One possible sign of food sensitivity that is easy to recognize is the presence of dark circles under the eyes, which allergy specialists call “allergic shiners.” People often mistake dark circles for signs of poor sleep or fatigue, but dark circles are most often a sign of allergy or sensitivity.

An example from my own personal experience: I underwent complete food allergy (skin) testing and was found to have no allergies to any of the foods included in the panel, including nuts. However, whenever I ate something that contained small amounts of nuts, the next morning I would see dark circles under my eyes (along with a variety of other unhappy symptoms), which I did not normally have. 24% of people who do not have allergies have allergic shiners—how many of these non-allergic people have food sensitivities?

Unfortunately, the only way for you to discover whether or not your ADHD symptoms are due to a food sensitivity is to do your own dietary experiment. There are many ways to do this, but the two most popular are the all-at-once approach and the one-at-a-time approach. You may prefer to remove all of the most common culprits for two weeks and see if you feel better. If you do, then reintroduce one food at a time for at least three days in a row to try to identify the guilty food (or foods). Others prefer to remove one culprit at a time for two weeks to see if that single food is causing the problem. If it is not, that food can be added back, and the next suspect can be removed for two weeks, and so on. This approach takes much more time, but some people find it easier than removing so many culprits all at once.

When people ask me what diet I recommend to identify if food sensitivities may be causing ADHD, I recommend what I call a “hypo-allergenic” Paleo diet for two weeks. This diet consists of:

After two weeks if you are feeling better, you can try adding back beef, pork, fish, citrus, tomato, coffee, tea, etc. one at a time for three days each to see if they bother you.

Keep in mind that any food can be a culprit, including any food on my hypo-allergenic Paleo diet, so some people may need to explore further, but the above diet removes all of the most common culprits.

These dietary experiments can be frustrating and difficult, but they can also be very illuminating. Once you have figured out your food sensitivities, it does not mean you can never eat that food again—that’s completely up to you—but at least you’ll have more control over how you feel from day to day if you want to!

Have you been able to reduce your ADHD symptoms by making dietary changes? What has or has not worked for you?

If you are want to learn more more about ADHD and diet, you may be interested in my articles "Sugar and ADHD" and "Attention! Is Your Diet Causing ADHD?"