Five Meaty Myths to Chew On

Meat-phobia is sweeping the country, and for good reason. Alarming headlines proclaiming that meat, especially red meat, was put on this planet specifically to kill us, surely deserve our attention. After all, how could all of those big studies conducted by intelligent scientists at prestigious institutions steer us wrong? So, is red meat bad for you?

Even if the research weren’t so compelling, it stands to reason that meat, the staple food of our uncivilized ancestors for nearly two million years, would suddenly be responsible for the lion's share of diseases of Western civilization, most of which were uncommon to rare until about a hundred years ago. Right?

All of the studies suggesting that red meat increases risk for cancer and death are epidemiological studies, not experiments, and therefore cannot prove cause and effect. They amount to nothing more than (biased) hunches about the underlying reasons for diseases. Furthermore, the epidemiological studies are a mixed bag of positive, negative, and neutral findings, all pointing in different directions.

For a shining example of a scary experimental meat study which turns out to be a paper tiger, please read my post "Does Carnitine from Red Meat Cause Heart Disease?"

Yes, charred meats do contain "polycyclic aromatic hydrocarbons" (or PAHs), but did you know that ALL charred foods contain PAHs—even those grilled vegetables we think of as so healthy? It turns out that most of the PAHs we eat come from cereal products, not grilled meats.

Myth #3: Hot dogs are unhealthy because they contain nitrates and nitrites

It is true that nitrates and nitrites have the potential to form carcinogenic compounds within our bodies, but these compounds are everywhere, not just in preserved meats. In fact, did you know that—ounce for ounce—spinach contains at least 30 times more nitrate than hot dogs do? While one could argue that hot dogs are not the healthiest forms of meat, due to processing and added chemicals, the fact that they contain nitrates is not the most important reason to avoid them.

Myth #4: Red meat is higher in cholesterol than chicken or fish

Cholesterol is built into the membrane of every cell of every animal, therefore all muscle meats—red meat, light meat, and white meat—from all kinds of animals—from birds to fish to cows—contain about the same amount of cholesterol per pound. Oh, and by the way, food cholesterol does not cause high blood cholesterol.

Myth #5: Eating too much meat will cause the kidneys to shut down

There is only ONE study suggesting a connection between animal protein intake and kidney disease, and it was an epidemiological study. The vast majority of experimental studies about kidney disease in humans point to refined carbohydrates as the likely culprit.

As far as I can tell, the only way that meat can hurt you is if it is packaged as a live saber-toothed tiger running towards you.

So, despite the fact that meat is the only nutritionally complete food on earth—rich in high quality protein, vitamins and minerals and naturally low in fattening carbohydrates—run! Run for your life. It’s gonna get you :) 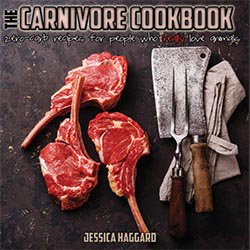 Jessica Haggard recently (2019) published The Carnivore Cookbook. She has created many tasty recipes, and includes good tips for finding affordable meat and how best to prepare different cuts. There is also an entire chapter on offal (organ meats). [Disclosure: Because I really like this cookbook I have entered into an affiliate relationship with the publisher Primal Edge Health to offer my readers a $5 discount with coupon code GEORGIAEDE. Please know that I value the trust of my readers and wouldn't refer you to the book if I didn't truly recommend it.]

You may also want to check out my conversation with Tristan Haggard on his Primal Edge Health podcast about the benefits of eating meat for mental health. It is available both in audio and video format.