Are Vegetables Good for You?

We are told that vegetables are powerful and virtuous—that they fight off cancer, sweep our digestive systems clean, and strengthen our immune system—that they can leap tall buildings in a single bound. Yet vegetables have a dark side. They don’t want to be eaten any more than animals do, and use sophisticated chemical weapons to defend themselves . . .

We think of them as virtuous, vital components of a healthy diet . . . yet vegetables are cunning and manipulative.

Pretend you are a plant:

How do you protect yourself?

Well, you might have thorns or other special structures to help deter some invaders, but mostly you use chemical weapons . . . and very sophisticated ones, at that. Plants have been on this planet a lot longer than we have and they’ve got our number. They know what we like and don’t like. They know how our cells work. They know our strengths and weaknesses.

They have gone out of their way to make some vegetable parts taste bitter, so that we are less likely to want to eat them. In fact, the produce industry has had to work hard to breed bitterness out of vegetables so that we will be more likely to buy them. These bitter substances not only taste bad, they also function as highly specialized pesticides that are designed to kill insects, larvae, worms, bacteria, and fungi. These include things like:

Because we believe that vegetables are good for us, we spend lots of time, energy, and money trying to prove how these bitter pesticides might be beneficial to human health. Because many of these same chemicals function as “antioxidants” in the laboratory, scientists enjoy studying how they might be used to fight cancer and other diseases.

Fair enough, but wouldn’t it make sense to also wonder whether these chemicals might be harmful to us?

Vegetables are any plant parts that are not fruits, seeds, or flowers. Vegetable parts include roots, tubers, bulbs, stems, and leaves. Plants want animals to eat their fruits (and interact with their flowers and seeds), but plants need to protect other body parts–their vegetable parts— from predators, so they can survive. I would argue that plants do not want their vegetable parts to be eaten. 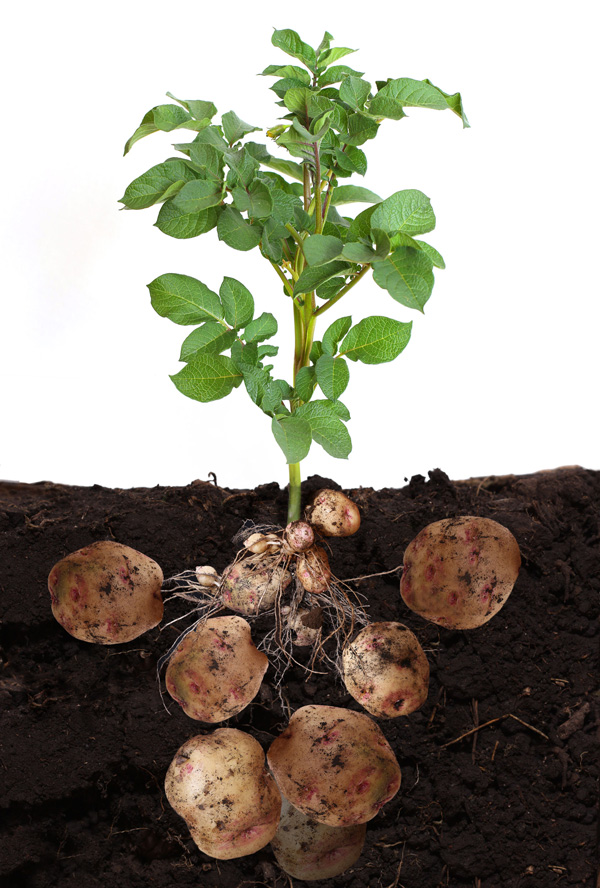 Examples of roots: carrots and beets
Examples of tubers: potatoes and yams

Roots and tubers are carbohydrate storage organs, so they are mostly made of starch. Starch is what plants use for energy (animals prefer to use fat). Starch is very heavy, so it’s easiest for the plant to store it on the ground or underground, in roots and tubers, instead of up top in branches or leaves.

Bulbs are immature plants that contain lots of starch to nourish the baby into adulthood.

The job of the stem is to hold the plant upright and deliver nutrients from its roots to its tips, so it has to be strong. This is why stems are very high in insoluble fiber, or cellulose. This is a very tough, stringy, woody type of plant carbohydrate that humans cannot digest.

The leaf is the plant’s solar panel, catching the sun’s rays and turning them into energy through photosynthesis. Photosynthesis is the magical process that plants use to turn carbon dioxide and water into sugar and oxygen, using sunlight.

Do we need vegetables in our diet?

As outrageous as this may sound, I find no scientific evidence that vegetables are essential components of the human diet, because I am not aware of a single study that compares a diet containing vegetables to a diet without vegetables.

Thankfully, scientific laboratories are not our only sources of valuable information about the world. There’s real life evidence we can turn to that can answer our question.

We happen to know that a number of populations throughout history have eaten diets containing extremely few or even no vegetables, and historical reports tell us that these people were very healthy. Eskimo populations at the turn of the 20th century are the clearest examples of this phenomenon. No plants grow up there, so these frozen folks had no choice but to eat an essentially all-animal diet. Physician explorers of the time (before trade routes exposed traditional peoples to outside foods) observed that cancer was virtually nonexistent in Eskimo villages.

Even if the historical record doesn’t prompt you to wonder whether vegetables are really necessary in the fight against cancer, it should at least convince you that vegetables are not required in the human diet for daily bodily function. That these people were somehow able to get all of their essential vitamins and minerals entirely from animal foods I find to be fascinating and important information. These were not short-term studies lasting weeks or months or a couple of years. These were real people living entire lifetimes, being physically active, reproducing, etc., with little to no vegetable matter in their diet (and therefore virtually no carbohydrate). No biased researchers, no study subjects guessing about what they ate or cheating on their diets. I would argue that this kind of evidence is far more convincing than any scientific study.

Are vegetables good for us?

Okay, so they don’t seem to be necessary, but how do we know that Eskimos wouldn’t have been even healthier if they had added vegetables to their all-meat diet? We don’t know. So let’s look at the scientific research to see what it tells us about vegetables and health.

For example, because people believe vegetables are healthy, people who eat more vegetables tend to be more health-conscious in general. Health-conscious people also tend to do lots of other things differently from the average person—they may eat less processed food, drink less alcohol, smoke less, eat less sugar, count calories, exercise more, etc. These other differences are very hard to account for in studies. The only way to really figure out if vegetables are healthy is to compare a diet with vegetables to a diet without vegetables. I know of no scientific study that has done this.

So, epidemiological studies suggest that people who eat more vegetables might be healthier. In order to prove this hypothesis, we need to do experiments. What do actual clinical experiments tell us?

I compiled the following information for a recent presentation I gave at the Ancestral Health Symposium [you can watch the video at the bottom of this post!]:

As of this writing (August 2012), there are 762 clinical studies listed in PubMed (a scientific search engine) having to do with vegetables and human health. Most of these are studies of how to get people to eat more vegetables; there are very few clinical trials attempting to show that vegetables are healthy. There were only 38 clinical studies designed to evaluate specific health effects of actual vegetables (as opposed to special concentrated vegetable extracts or isolated vegetable nutrients), and the vast majority of these (31 of the 38), unfortunately, used fruits and vegetables, instead of just vegetables. Fruits are so different from vegetables that it’s like comparing apples and oranges . . . except that it’s even worse, because at least apples and oranges are both fruits! However, let’s try to ignore these major design flaws and see what researchers found.

Oh, and in case you’re wondering, of the 7 lonely studies that did look only at vegetables (instead of fruits and vegetables together), 6 of those 7 studies just happened to fall into the negative category, meaning that the vegetable(s) did not provide the health benefit expected. Hmmm.

Don’t we need to eat vegetables for fiber?

Fiber is an important enough topic that I gave it its own page on the site.

Aren’t vegetarians healthier than other people?

For detailed information about this question, please see my post: "Food Fights: Are Vegan Diets Healthier?"

In the following table you can see that animal products are superior sources of most essential vitamins and minerals, including four that do not exist in plant foods at all:

This is a very complicated topic, and I’ll be writing lots more about this over time. For starters, many vegetable antioxidants that appear to have anti-cancer and anti-inflammatory properties in laboratory studies also happen to be the same chemical weapons that plants use to defend themselves. Therefore, it makes sense that many of these isolated compounds not only have the power to kill cancer cells, they also have the power to kill healthy, normal cells. Like any form of chemotherapy, the most powerful vegetable antioxidants are, at best, double-edged swords. [I go into more detail about antioxidants on my fruits page.]

Since antioxidants from each vegetable family are numerous, unique and complex, they will be explored in detail in the special occasional articles in my food blog. From cruciferous vegetables like broccoli to nightshades like white potato, you will discover the clever ways in which each vegetable family protects itself in the world, and how its specialized defensive chemicals affect your body.

The first veggie blog post, "Is Broccoli Good for You? Meet the Crucifer Family," looks at how crucifers use sulforaphanes to protect themselves and how that might impact your health. "How Deadly Are Nightshades?" includes lots of interesting information about potatoes, as well as about tomatoes and eggplants (which are actually fruits masquerading as vegetables).

Watch my 2012 Ancestral Health Symposium presentation about the the risks and benefits of eating vegetables: